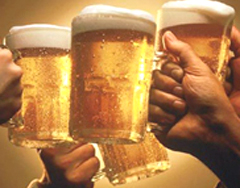 It appears that Wisconsin’s beer tax, the nation’s third lowest, will remain where it’s been for the past forty years. While this legislative battle appears to be over without a bill ever being debated or given a committee hearing, Tavern League president Rob Swearingen is not letting his guard down yet. “I’m worried about another increase,” Swearingen said during a Capitol press conference Monday. “The blue-collar worker, the couple that are working 9:00 to 5:00, cannot absorb another tax increase. Right now is just not the time.”

Swearingen has Governor Jim Doyle in his corner. Doyle opposes an increase in the state’s beer tax, a big disappointment for the bill’s principal author, state Representative Terese Berceau . “And the reasons cited really don’t sound particularly enlightened, excuse me for saying that,” said the Madison Democrat. “One of the things that he (Doyle) has said is that it isn’t the same as smoking, in terms of causing health problems for others. I just can’t understand saying that.” Berceau said her tax increase proposal has picked up “about two” cosponsors – but Assembly leaders are not interested in advancing the bill. Berceau, who introduced legislation in April , would increase the tax on beer by just under three cents a bottle. Money from the tax would be used to pay for law enforcement and alcohol abuse treatment programs.

Capital Brewery President Carl Nolen said the proposed beer tax increase would mean a $184,000 increase in costs for his brewery – the equivalent of four full-time jobs. “Laying off four people at our company would be hard,” said Nolen. “I know them by name. I know their spouses. Eight of our fourteen people are the only breadwinner in their family, and one of those is a single mom. I mean, these are real people, and this is a hard time right now.” Jeff Hamilton with Sprecher Brewing agreed with Nolen, and said the impact of the tax hike could spread beyond his Milwaukee brewery. “I buy all my glass and all my paper products right here in Wisconsin . . . so those jobs are also affected when volumes go down.”

This battle over Wisconsin’s beer tax is a big deal in a state with a rich brewing heritage, a point which even Berceau concedes. “I have a German mother who, if she wasn’t in an assisted living facility, would have her beer everyday, still,” said Berceau. “Beer is part of the culture of my family.”

“Wisconsin’s got a great history of beer,” said the Tavern League’s Swearingen. “That’s one of the few freedoms we enjoy, as a business person selling it, or as a consumer the end-user. Beer’s been taking enough beatings, and they should look to other avenues to solve their problems.”