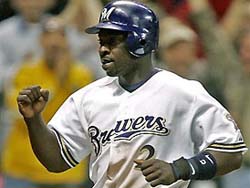 The Milwaukee Brewers won a pitchers duel at Miller Park, knocking off the St. Louis Cardinals 1-0 at Miller Park on Memorial Day.

Yovani Gallardo and Chris Carpenter were locked up in a real pitching duel.  In fact, Carpenter was perfect through 6 innings before Craig Counsell led off the seventh with a single to break up the perfect game.  The Brewers failed to score though and both Carpenter and Gallardo went on to work 8 strong innings before giving way to the bullpen.

For the second day in a row, Brewers manager Ken Macha had a mix up with the umpires, only this time it appears to be his own fault.  Macha tried to double-switch Trevor Hoffman and third baseman Bill Hall, but apparently he didn't notify the umpires of the switch soon enough.  So Macha had to bat Hoffman second in the bottom of the 9th.  That meant a one-inning stint for Hoffman and the Brewers failed to score in the 9th.

Carlos Villanueva retired the Cardinals in the 10th.  In the bottom half, Casey McGehee reached on an error by Cardinal 3rd baseman Brian Barden.  He eventually scored on Bill Hall's looping single to right center for the walkoff game winner.

Hall didn't start the game.  Ken Macha instead went with rookie Mat Gamel, who made his first home start.  Hall is in a terrible hitting slump, going 1 for his last 28 on the last road trip.  But he's the hero on this day as the Brewers end a 3-game losing streak and move back 1-game in front of the Cardinals for first place atop the Central Division.

In all, just five hits between the two teams, 3 by the Brewers and 2 for the Cardinals.  Game two of the series is tomorrow night at Miller Park.