You are here: Home / News / Does no mean no? With Brett Favre, who knows! 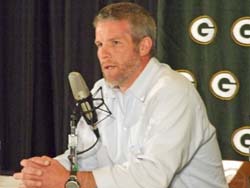 A short time ago, Brett Favre issued a statement that he's still retired, "at this time".  ESPN's Trent Dilfer asked him again this week, via text.  Favre's response was reportedly a big "No".

Yet Favre's name is still surfacing around the league, both in story form with journalists, as well as fans that followed the future Hall of Fame quarterback since his early days in Green Bay with the Packers .

Favre said no.  But based on the chatter, most people really don't believe him.  Experience has proven that there'll likely be a time before training camp starts up that Favre will change his mind and feel that he can make it through another NFL season and do so with efficiency.

Nobody really knows one way or another.  What we do know is that Favre's answer now really doesn't hold much weight because he's likely to change his  mind a few more times.  So stay tuned!