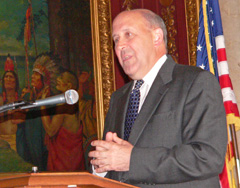 Extreme cuts, layoffs, and furloughs are needed to fix the overexpanding budget hole.

Declining revenues could add another 1.5 billion dollar gap to the current 5 billion dollar deficit and, as a result, Governor Jim Doyle says up to 11-hundred state employees could be laid off. Doyle also proposes 16 days of furloughs for all state workers over the next two years.

"Under state contracts I can impose a maximum of eight days per year and this is the equivalent of a 3% pay cut."

The governor wants to rollback the 2% pay increases for nonunion employees that were set to take effect in June. After deciding to furlough state workers, Doyle says he'll also make some sacrifices.

"As you probably know the Constitution already freezes my pay, and I cannot be furloughed. However I will return eight days of pay each year to reflect exactly what we are asking all state employees to do."

That amounts to a little over $4,000 each year. Doyle warns, we can expect longer lines, fewer services and higher tuition for college students. Next week we'll have a better look at the budget deficit as the Legislative Fiscal Bureau releases its analysis.