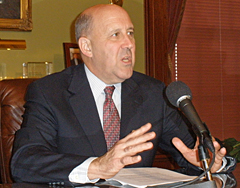 Is Wisconsin's state budget deficit now a moving target? After signing legislation Friday that will enable the state to use federal recovery money, Governor Jim Doyle was peppered with questions on the still escalating budget deficit.

The Legislative Fiscal Bureau's estimate grew an by additional $50.7 million on Thursday. "We have moved into a very different world, in which those estimates are changing very rapidly now," said Doyle. "Obviously, what we were told in February were conservative estimates, weren't nearly conservative enough."

That February budget shortfall projection, $5 billion, was jacked up by another $1.5 billion just Monday. The state's shortfall through mid-2011 is now at $6.5 billion – but is that the final estimate? Asked if the budget deficit is now "a moving target," Doyle says he's requesting "the gloomiest number" possible – but he believes the situation is stabilizing. "Can I tell you whether three months from now, they might be saying there's a whole new wave of bad news that's moving through the American economy or the world economy? The best answer to that is no, but you can't be certain."

Doyle refused to be pinned down when asked what sort of cuts to shared revenue may be expected by local governments and school districts, except to say that those cuts will be five percent or more.