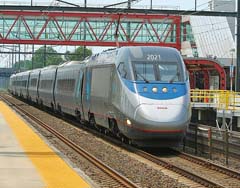 "Basically, they're gauging what do people want in passenger trains," says Plasterer, adding that chief among the decisions that need to be ironed out is what equipment will be used. "The wonderful trains in Europe, we can't use, because they don't meet our safety standards." There's been some talk about building rail cars at Janesville's idled GM plant, an option Plasterer doesn't rule out. "I think it's possible. You've obviously got a group of skilled workers (who) could do it. However, building automobiles and railroad cars are a bit different: automobiles sell for twenty thousand, railroad cars sell for about two million."

The Obama administration has set aside some eight billion dollars for high speed rail, but there are seven regions in competition for that money. "Other parts of the country have spoken up, now there's going to be a big demand for this." Plasterer says. "The advantage we think we have in the Midwest, the environmental (impact) statements have all been done. They've been done in the last three or four years, by the people in the Wisconsin DOT.

Wisconsin politicians have a history of supporting rail transportation. "Tommy Thompson and his secretary of transportation, Terry Mulcahey, were very strong supporters of Amtrak and inter-city rail, says Plasterer, adding that Governor Jim Doyle and current DOT Secretary Frank Busalacchi are also strong supporters. Plasterer believes the support of the Obama administration and last year's fuel cost spike have people looking seriously at passenger rail. "I think that's where we stand, but it will be a large capitol investment," he says. "But look at what we've spent on the Interstate System for the past fifty years." Monday's Midwest Region workshop is at the Marriot in downtown Chicago.