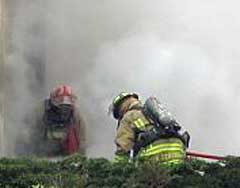 The Eau Claire County Courthouse remains closed today, after a transformer fire caused the Eau building to be evacuated Tuesday afternoon. The fire was reported shortly after noon. Black smoke was pouring out of an electrical vault adjacent to the basement of the courthouse.

The fire did not spread inside the building, but all employees not working in the jail were evacuated, and Huber Center inmates were released. Sheriff Ron Cramer said deputies were preparing to relocate the secure inmates if it became necessary, something they've never had to do before.