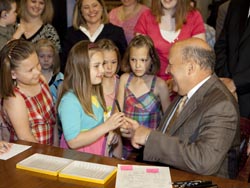 Children who are deaf or suffer from hearing loss will have easier access to devices that can help them hear the world around them, under legislation signed by Governor Doyle on Thursday.

The bill requires insurance companies to cover the cost of hearing aids and cochlear implants. State Senator Julie Lassa (D-Stevens Point), a chief sponsor of the bill, says it will help many children get the devices they need to lead a normal life. She says the bill also helps to protect families from having to dig deep in their wallets to keep their kids from facing a silent world.

Hearing aids can cost up to $3,000 each and cochlear implant surgery is up to $80,000. Lassa says most insurance companies have refused to cover them, with some arguing they are "cosmetic" devices. During hearings on the bill, she says lawmakers heard from numerous families who pay large health premiums each month, only to find the vital devices aren't covered.

This week saw a last minute effort from members of the deaf community urging the governor not sign the bill, arguing it threatens their way of life. Lassa says the mandate doesn't force anyone to get an implant. She says it's unfortunate that a small minority in the deaf community would try to deny other families the choice of helping a deaf child hear.