You are here: Home / Health / Medicine / H1N1 could get serious if not prepared 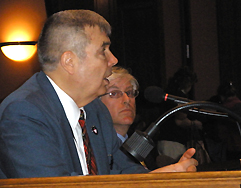 State Health experts discuss the flu virus at a public hearing at the state capitol.

Dr. Dennis Maki, head of Infectious Diseases at the UW Medical School, tells members of the Assembly Health Committee the H1N1 Influenza A is serious.

"What I think is very likely going to be a global pandemic … everything suggests that to me. I'd be very surprised if we don't continue to have spread."

Maki says the initial concern among health experts was that this particular flu would be an unusually virulent strain, but he says, it's not as serious as originally feared – no worse than the seasonal flu – but we can't be complacent, either.

"Does that mean we should relax? Absolutely not, because everybody is going to be susceptible and it will come back this fall, I think, with a fury. And we'll have a lot of disease. And we could have 100-million people get influenza this winter – this fall and winter."

Maki says we will see deaths from this type of flu, especially in the elderly population. He stresses the importance of being prepared.

"We absolutely have to prepare for this virus in terms of a vaccine and also prepare our hospitals, our public health sector, and our school populations. There has to be an unprecedented level of preparation."

Maki says we dodged the bullet in the SARS epidemic of 2006 because of good preparedness, and we could learn from that.