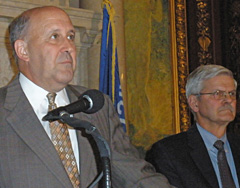 State agencies, local governments and even education will make sacrifices.

The struggle to fill the ever-expanding state budget hole, calls for even deeper cuts.

"Now in order to address this larger shortfall, in addition to cuts I've already proposed, we will cut another $1-billion from state government."

Governor Jim Doyle says the previously announced cuts plus the new ones total 2.7 billion dollars through the biennium. Doyle says the services Wisconsinites rely on will be effected.

"We will impose at least 5% across the board agency cuts which is significantly higher than the 1% cuts I proposed in my budget."

About 1100 state employees will be laid off, all workers will be furloughed for 16 days and non-union members must rollback their 2% pay raise. If union workers refuse to forgo their upcoming 2% hike, Doyle says another 400 workers will have to be laid off.

Education has been a top priority for the governor, but that too, will be slashed.

"Because of this unprecedented economic crisis, we have agreed that we will have to cut school aid by about 2.5%."

The Joint Finance Committee is scheduled to meet Friday and Saturday to discuss the details of the new plan.