You are here: Home / News / Slow start doesn't do in the Brewers 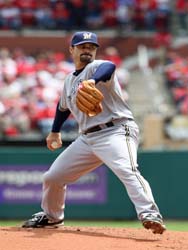 Jeff Suppan (pictured) allowed 3 runs in five innings of work, then the bullpen took over.  Seth McClung, Carlos Villanueva, Todd Coffey and Trevor Hoffman went the rest of the way to shutdown the Astros.  Hoffman picked up his 11th save in 11 chances.

Prince Fielder drove in two with a single and Corey Hart had an RBI double in a three-run seventh to pull the Brewers from behind.  Hunter Pence and Miguel Tejada homered in the loss for the Astros who blew a 3-0 lead.

Listen / Download – Roy Oswalt said his high pitch count did him in. :20