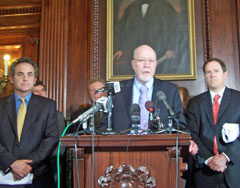 A compromise has been reached on a statewide smoking ban. Madison Democrat, state Senate President Fred Risser, was on hand as the compromise deal was announced at a Capitol press conference. “No legislation is perfect, and no compromise will satisfy everyone,” said Risser. “But the compromise we have here today is a good one, and I will be urging my Senate colleagues to approve it. Many of us have been working on this for years.”

“We are looking at a start date of July 5 of 2010,” said Waunakee Democrat, state Senator Jon Erpenbach. “Basically the only exemptions we are looking at is for existing cigar bars and tobacco retail shops. Otherwise it's pretty much a clean bill.” As for fines, Erpenbach said individuals who light up can be fined between $100 and $250 per violation. Taverns will only be fined if they make no effort to stop patrons from smoking.

“This compromise will create a level playing field, not only in Wisconsin, but with our neighboring states of Illinois, Iowa and Minnesota,” said Risser, noting that a majority of U.S. residents live in states with bans already in place. “As soon as this bill takes effect, it will start saving lives of our citizens, and saving money for our taxpayers.”

Tavern League President Rob Swearingen said the ban, which would go into effect statewide on July 5, 2010, will be an adjustment for his members. “When I talk about my members, I talk about the five thousand mom and pop taverns across the state of Wisconsin,” said Swearingen. “So this legislation will effect . . . the tavern on the corner. He's the guy we're talking about today, we're the small guy.”

The bill has been on a fast track: hearings were held this week with short notice in both the Assembly and Senate health committees, and Milwaukee Democrat Jon Richards, who chairs the Assembly panel, says he expects members to vote on the measure on Friday. “There are many parts of this compromise of this compromise that I'm not happy with,” said Richards. “But it's a compromise. It's brought Democrats and Republicans together. It's brought the Tavern League and Smoke Free Wisconsin together, and it's going to work well for Wisconsin.”