You are here: Home / News / Students on tour for high speed rail 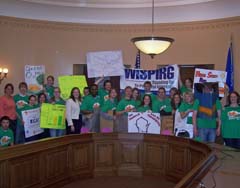 "Students are attracted to large cities," Uhl said during a press conference at the Capitol on Wednesday. "They want to have access to advanced public transit." Uhl noted that many UW graduates leave Wisconsin for destinations such as Boston, New York and Chicago, with more rail links and better public transportation. "If Wisconsin wants to reduce the brain drain that we see, we need to support public transit and RTA legislation."

Uhl and other members of the Wisconsin Public Interest Research Group, or WISPERG, note that Governor Jim Doyle and WISDOT Secretary Frank Busalachhhi are committed to bringing high speed rail to Wisconsin. The state is actively seeking some of the eight billion dollars allocated for high speed rail in the American Recovery and Reinvestment Act. Decisions on which projects will be funded will be made later this year. The Wisconsin segment of a Midwest rail corridor would connect Madison, Milwaukee and Chicago, and could eventually include high speed rail connections with the Twin Cities and Green Bay.

"I think it's incredibly important that we build this regional connection and connect to a national system," said Madison Alder Satya Rhodes-Conway. "It's important for economy in Madison and Dane County that we be connected to Milwaukee and Chicago, both for business and business travel but also for tourism."

Uhl pointed out another attraction of high speed rail: transportation is Wisconsin's second largest contributor to greenhouse gas emissions. "We have to move forward into the 21st Century. With the support of Predigest Obama and Governor Doyle, we can build a 21st Century transportation system that addresses these problems."