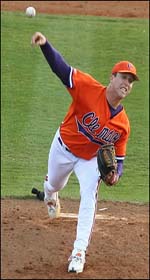 Berken started the year with the Class AA Bowie Baysox, but was promoted to Class AAA last month after just two starts.

In five starts with the Norfolk Tide, Berken went 2-0 with a 1.05 ERA.  That effort has earned him a shot in the bigs.  He'll start for the Orioles tonight against the Toronto Blue Jays at Camden Yards.

Berken was a 6th round draft pick by Baltimore in 2006.  The Orioles needed starting help after releasing veteran Adam Eaton last week.