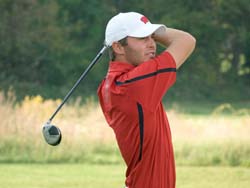 Wisconsin senior golfer Dan Woltman earned the first alternate spot in the local U.S. Open qualifying tournament Tuesday in Kenosha (Wis).  Woltman shot an even-par 72 to finish in a three-way tie for fourth place and earn a spot in a playoff for the final two qualifying spots for the sectional.

On the second playoff hole, Woltman had to withdraw, picking up his marker on the green while facing a three foot putt to extend the playoff.  He had to catch his flight to New Jersey to take part in this weekend's NCAA East Regional.