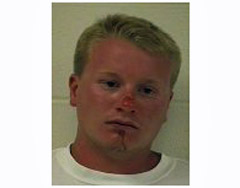 A Weston man who was celebrating his 23rd birthday Saturday night with a couple of drinks has been charged in the drunken driving death of an Oshkosh man.

Matthew Vissers told police he was just trying to have fun and had drunk two or three beers before he crashed into a motorcycle driven by Gregory Davis of Oshkosh.

Police say Vissers was coming from a bar in Rothschild and swerved across the centerline northbound on Business Highway 51 when the crash happened about 9:30 Saturday night. Vissers told police “I did not see him coming.”

Davis was pronounced dead at the scene. Vissers, who has a conviction for drunken driving in 2006, was arrested and charged with drunken driving homicide. He's been jailed on a $7500 cash bond pending a preliminary hearing in early August.