You are here: Home / Brewers / Brewers grab six players on day one of MLB Draft 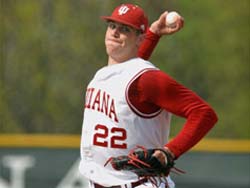 The Milwaukee Brewers selected six players during the first day of the First-Year Player Draft.

The Brewers first-round selection (26th overall) was RHP Eric Arnett from Indiana University.  Arnett, who just completed his junior season, was named the Big Ten co-Pitcher of the Year and a First Team All-Big Ten selection.  Arnett tied the school record for wins (12) and strikeouts (109), going 12-2 with a 2.50 ERA including six complete games and a .212 batting average against.  Arnett was also named Second Team All-American by Louisville Slugger and Collegiate Baseball News.

With two supplemental first round picks, the Brewers selected OF Kentrail Davis from the University of Tennessee with the 39th overall selection.  At pick #47, Milwaukee took RHP Kyle Heckathorn from Kennesaw State University.

The Brewers had two draft selections in the second round and selected OF Maxwell Walla from Albuquerque Academy in New Mexico with the 73rd pick.  With the next selection, Milwaukee chose C Cameron Garfield out of Murrieta Valley (CA) High School at pick #74.

Rounds 4 through 30 get underway at 11am this morning.