You are here: Home / Brewers / Brewers use 42nd round selection on Wisconsin pitcher 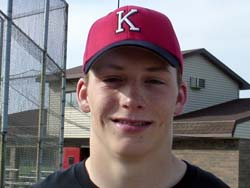 The Milwaukee Brewers wrapped up the 2009 first-year player draft, and selected a Wisconsin player on the 3rd and final day of the draft.

The Brewers made Kimberly RHP Brad Schreiber their 42nd round selection.  Schreiber helped Kimberly advance to the WIAA State Baseball quarterfinals next Tuesday.  He's already committed to attend college on a scholarship at Purdue next year.

One other Wisconsin player taken by the Brewers on the 3rd day of the draft today is RHP Cullen Sexton of Plover, who pitches at the University of Minnesota.  Sexton was selected in the 37th round.

The Brewers made 20 picks on the third and final round.  Overall, they made 53 picks over the three days of the draft.  Of the 53, 33 players were college players and 20 were high schoolers.  Also, 25 were pitchers, 19 right-handers and 6 left handers.