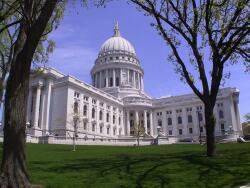 It could be a lot tougher to investigate wrongdoing by state lawmakers, under terms of a state budget provision. The state Senate version of the budget would require the Government Accountability Board to ask the legislature for money, to investigate potential wrongdoing by legislators.

"The legislature doesn't want to have some separate entity being able to investigate possible wrongdoing," said Jay Heck with Common Cause in Wisconsin. "That's exactly the problem that we had nearly ten years ago, when there was illegal campaign fundraising occurring in the Capitol." Accountability Board executive director Kevin Kennedy provided details of GAB investigations during the first eighteen months of the agency's existence.

Heck and Kennedy say an independent source of funding is essential, for the GAB to conduct any kind of meaningful investigations. "You want to have an agency that is not reliant on the people it may be investigating, for the funding to conduct the investigation," says Heck. Kennedy says there's another reason why that independence is essential. "You want to have a viable agency because it gives the public confidence that someone is holding state public officials responsible," he says. "Wisconsin has a pretty good record for that. We can point back to some problems in the past, but overall we don't have the same reputation you'll see in other states, some of them not too far south from here."

Heck and Kennedy say they hope this provision is eliminated by the budget conference committee, or vetoed by Governor Jim Doyle.