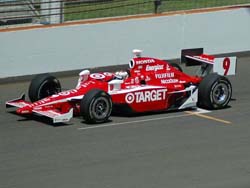 Scott Dixon captured the A.J. Foyt 225 at the Milwaukee Mile on Sunday.

Dixon, who is the defending IndyCar Series champion, passed 2008 A.J. Foyt 225 champion Ryan Briscoe with 25 laps to go and held on for his second win of the season and the 18th of his career.  Briscoe finished second after starting from the pole.