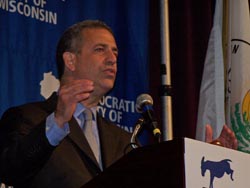 Feingold says President Obama has made it clear that a single payer system should be an option in any health care package passed by Congress. Obama spoke in Green Bay last Thursday about the need for health care reform.

Speaking at the Democratic Party of Wisconsin's annual convention in Green Bay over the weekend Feingold said it's an issue that needs to be addressed quickly, with so many Americans being “demolished” by the current system. The Wisconsin Democrat says people should not have to worry about what insurance will cover when a loved one is facing a major medical problem.

During his convention speech, Feingold also stressed the importance of preserving jobs in Wisconsin. He called on the Obama administration to follow-through on its promise to do things differently when it comes to unfair trade agreements that have hurt the economy.

For those jobs that have already been lost, Feingold says the government needs to find ways to get people back into the workforce quickly. He discussed one plan he's offered, which would retrain workers to join the health care industry.