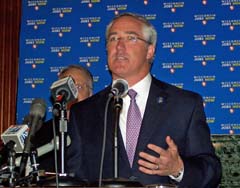 Republican lawmakers have released a report on growing jobs in Wisconsin. State Representative Rich Zipperer says the report, from the Wisconsin Jobs Now Task Force relies heavily on input from job creators – business people from around Wisconsin. “We weren't asking them to draft up an entire new state budget,” Zipperer says. “We were asking them their ideas of how Wisconsin can create jobs, what policies should our state enact that will help us grow our economy.”

“These recommendations are a first step to starting a dialogue with our colleages across the aisle,” says state Senator Randy Hopper. “To enact some legislation, with the concept of understanding how do we create jobs and how do we help our state get to a place where we can have a story to tell. I would argue we don't have that story.”

Hopper says input from the state's business community has not been considered during the ongoing state budget process. “The idea behind this is to share this with colleagues throughout the building, so they can understand, if that's the direction you want to go . . . then these recommendations are things you need to take into consideration.”