You are here: Home / Brewers / Hoffman caves for the first time as a Brewer 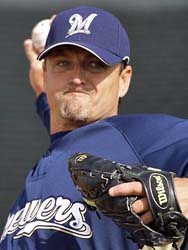 Up until Sunday, Trevor Hoffman hadn't surrendered a single run as the closer for the Milwaukee Brewers .  But all good things usually come to an end and it did on Sunday.

Hoffman fell behind White Sox catcher A.J. Pierzynski 3-0 and then came into him.  Pierzynski had the green light and singled in the game winner with two outs in the top of the 9th to give Chicago a 5-4 win.  Hoffman's perfect 0.00 ERA entering the game is no longer, but the Brewers closer was only worried about one stat and that's the loss the Brewers took, to see them fall to 1-5 on the 6-game homestand.  They've lost 6 of their last 7 overall.

Braden Looper started and worked 6-innings for the Brewers.  It was a struggle for Looper, who gave up a home run to White Sox pitcher Mark Buehrle.

The Brewers got three home runs in the loss, two by Corey Hart and Casey McGehee clubbed his first career home run.

The Brewers continue with interleague play tonight in Cleveland against the Indians.  Dave Bush pitchers for the Brewers.  Carl Pavano goes for the Indians.