You are here: Home / News / It's OK to say cheese at the DMV 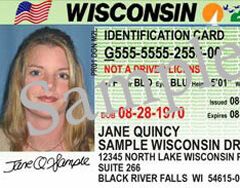 Some states adopt a "no-smile" policy in driver's license photos; will Wisconsin be next?

New facial-recognition software compares new photos with a data base of older pics in an effort to prevent identity theft and driver's license fraud. Some officials claim this high-tech system works better if all faces have a neutral expression, but not here at Wisconsin's Department of Motor Vehicles .

"We're in routine communication with our vendor and they have never notified us that they're having difficulty performing the searches or getting a lot of false positives because of someone smiling, so we're not in a position now to tell someone that they shouldn't."

Kristina Boardman, Director of DMV field services, says go ahead and smile. Their four-year-old software works fine, whether or not you show your pearly whites.

"And it works fine and we've never had to tell people that they can't smile, so."

Besides, Boardman says, it'd be pretty difficult to wipe that smirk off the face of a 16-year-old kid getting a driver's license for the first time.

NOTE: The four states ordering people to stop smirking at the DMV are Arkansas, Indiana, Nevada and Virginia.