You are here: Home / News / Kimberly's Hardy lands with Hawkeyes 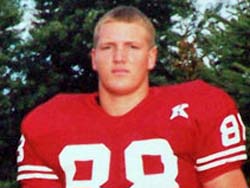 Kimberly's Mike Hardy (pictured) has become the 9th Wisconsin football player committed to the Big Ten.  The 6'5, 260 lb defensive end told the Wisconsin Sports Network that he has verbal committed to the University of Iowa, passing on offers from Wisconsin, Minnesota, Nebraska, Indiana, Purdue and Iowa State.

Hardy will be a senior with the two-time defending champion Papermakers this fall.  He'll join the Hawkeyes for the 2010 season.  Hardy is the first state player to commit to the Hawkeyes for 2010.  Five state players have committed to the Badgers, two to Minnesota and one to Indiana.