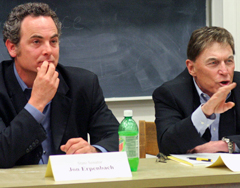 The author of government accountability legislation wants a potential funding cut restored. State Senator Jon Erpenbach is not thrilled that Senate Majority Leader Russ Decker's version of the state budget would require the Government Accountability Board to ask the legislature for money – to investigate legislators.

"You know, he's got a good point," says Erpenbach, referring to concerns that Decker voiced when the original legislation establishing the Government Accountability Board was debated in the state Senate two years ago. Erpenbach , a Dane County Democrat, and Neenah Republican Senator Mike Ellis wrote the GAB legislation to include so-called "sum sufficient" funding for investigations into potential wrongdoing by lawmakers. "But at the same time, I have a lot of faith in the folks who work at the Government Accountability Board. It's nothing they'd abuse. They have a job to do, it's pretty clear what they're job is. I don't expect any abuse because they're free to do what it is they need to do."

Accountability Board executive director Kevin Kennedy provided details on GAB investigations during the first eighteen months of the agency's existence. "We've opened fifty one investigations, forty of those we conducted in house," said Kennedy. Contracted costs for the remaining eleven investigations were "about $45,552," according to Kennedy.

"The concern is, if someone get's in there (GAB), and they have an agenda, what do we do then? But I think it will be pretty obvious if someone has an agenda," says Erpenbach. "Right now, I think they do a good job, and we need to restore the funding." That could happen in a Senate-Assembly budget conference committee, but if it doesn't Erpenbach says he'll urge Governor Jim Doyle to veto the funding cuts.