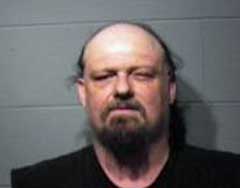 A man stabbed to death in Pardeeville early Tuesday may have been fighting over a woman with his alleged attacker. That's according to Columbia County Sheriff's Department investigators looking into the death of 43-year old Thomas Kratz of Montello.

Deputies were called just before 2:00 Tuesday morning and found Kratz lying in the street with a single stab wound from a large knife. The man suspected of attacking him, 46-year old James Henke, was taken into custody when officers arrived, and police say he's been cooperating with their investigation.