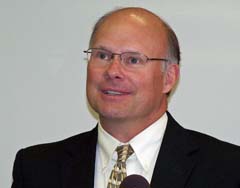 Dane County's new director of 911 services says a lot of the heavy lifting has already been done to improve an agency that's weathered a difficult year. In his first official meeting with the media after being named director in March, John Dejung was asked about the controversy that's surrounded Dane County 911 ever since the mishandling of a call from murdered U-W student Brittany Zimmermann.

“That was then, this is now,” says Dejung. “Anytime anything happens, positive or negative, especially negative, you want to look at it and learn lessons from it, and I know the county has done that. Dejung says 911 has made strides in equipment, staffing and training.

He was asked about a March non-emergency call where a caller asked about a parked vehicle where a man was later found dead. “Frankly, and this is perhaps going to sound flip . . . the operators that talk with residents on the phone aren't clairvoyant. Sometimes they have to deal with what they have to deal with.” Dejung, who comes to Madison after more than a decade as the head of 9-1-1 in Minneapolis, says he doubts that particular call would have been handled any differently in that city.

Dejung made it a point to praise the people he'll be supervising. “I met with the staff first thing this morning,” he said. “They understandably feel like they've been holding down the fort, and they have. They've been doing a good job.”