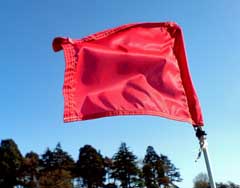 A Marshfield man had a dream, and it involved a lot of golf. Neil Riedel got to Riveredge Country Club at 4 a.m. Tuesday morning. He teed off at around 5 a.m. By noon, he'd already played over 100 holes.

“We played the first six or seven holes in fog,” said Riedel. “We just had to follow the ball the best we could.” Riedel, a cancer survivor, was golfing from sun-up to sundown to raise money for cancer research. “I had cancer, my mother had cancer, my mother-in-law died of cancer,” said Riedel, who eventually played 200 holes while consuming 36 bottles of water and sports beverage. “It's kind of a special project for me.”

On top of cancer, Riedel also survived being struck by lightning, ironically enough, while golfing at Riveredge. He said he was fairing pretty well, despite the day's extreme heat and humidity.