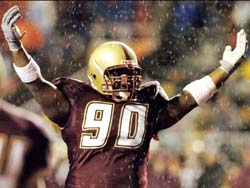 According to the Green Bay Press Gazette , the Packers have yet to begin contract negotiations with first-round picks B.J. Raji and Clay Matthews.  Raji and Matthews stand to receive well more than $20 million in guaranteed money.

Raji (pictured) was the 9th pick of the draft by the Packers and is in line for one of the richest rookie contracts in team history.  Last year's No. 9 pick, linebacker Keith Rivers, signed with the Cincinnati Bengals for six years and $23-million, with nearly $16-million in guaranteed money.

Clay Matthews was the 26th overall pick out of USC.  The 26th pick last year, tackle Duane Brown, received a 5-year, $9.1-million deal from the Houston Texans that included $6.2-million in guarantees.