You are here: Home / Politics / Govt / Policy in budget could delay bridge project 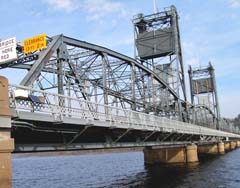 Another piece of policy buried in the state budget could impede a long delayed bridge project. State Senator Sheila Harsdorf, in whose western Wisconsin district the 78 year-old Stillwater lift bridge is located, says the language in the budget is pretty specific. “Prohibiting state or federal funds to be used on a bridge project that crosses a river forming a boundary of the state, if the project is awarded to contract using a design-build process,” says Harsdorff. “Bottom line, this is specific to the Stillwater bridge project.”

State Senator Mark Miller, co-chair of the Legislature's Joint Finance Committee that approved the provision, says there are concerns Minnesota would choose a project that would stick Wisconsin with an inflated price tag for the bridge.

Harsdorf says her constituents are tired of delays: “the Stillwater bridge is a very unique project. It was just about ready to go to bid in the mid-nineties when a lawsuit was filed, and it has hit hurdle after hurdle after hurdle, as we have watched the costs of the bridge just skyrocket.” Minnesota is lead state to replace the bridge, built in 1931, but costs will be shared between the two states.