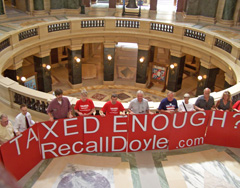 A group trying to recall the governor rallies at the capitol, saying enough is enough.

With a budget deficit of more than $6.6-billion, Wisconsinites Interests Now says the budget problem is much bigger than the governor. Vince Schmuki (shmoo-kee) of the group says the " Recall Doyle " effort has widened its target to include lawmakers in the Senate and Assembly.

"Because what's quite obvious, these are tone-deaf people; they really don't get it. Sometimes in politics it takes a two-by-four approach across the head to get somebody to wake up."

Schmuki says their recall efforts aim to highlight the budget-making process, which he says is very dishonest. Schmuki says he's had enough of deep-into-the-night sessions, behind closed door meetings, and decisions without public discussion. Schmuki is urging voters to do more than visit the polls in November, saying those who have a stake in the process actually need a voice in the process.

"We need people who are actively involved, contacting, being phycically present, being in the face of their legislators, their senators and their governor."

"Those are our children and our grandchildren. They're the one's who'll become economic slaves, paying off this debt. And this is not a small debt. We actually have a higher-per-capita debt than the state California, which I might add is bankrupt right now."

Schmuki says nobody can sustain this level of spending, and a corresponding amount of taxing to follow, without having destructive consequences to an economy, the state, and the future of Wisconsin. For naysayers, Schmuki explains that when the people no longer trust an elected official with their hard-earned money, a recall is not only allowed, but it is their duty.

The group is still in the organizational phase of their recall, and have not yet begun collecting signatures.

Doyle's office was contacted and they had no comment.