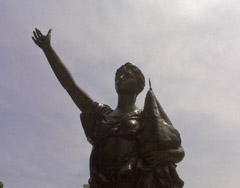 By a narrow one vote margin, the Wisconsin Senate has passed its version of a state budget. Democrat Jim Sullivan sided with Republican members in the 17-16 vote. A conference committee will resolve differences between this Senate version of the budget and the Assembly version of the $62.2 million spending plan, which passed last weekend.

"This is a bold and innovative budget during trying times," said Senate Majority Leader Russ Decker as debate opened on two year spending plan. "And there is no gas tax increase. This budget has no sales tax increase, no payroll tax increase, no across the board income tax increase, and we held the line on property taxes."

Minority Leader Scott Fitzgerald doesn't but the property tax claim, saying average homeowners will see increases this year and next. "Had Governor Doyle used sound budgeting techniques to balance the past, he wouldn't have to resort to increasing taxes and fees on Wisconsin families to solve his current budget problem," said Fitzgerald, adding that "it's irresponsible to raise taxes on families when Wisconsin is in one of the worst economic downturns in decades."

Republicans offered 31 amendments during the five hour long debate on the bill, all were tabled on parisan votes, including an amendment which would have stripped all policy items out of the two year spending plan.

Votes in the Assembly and Senate on formation of the budget conference committee could come as early as tomorrow.