You are here: Home / News / Smith getting his chances in Green Bay 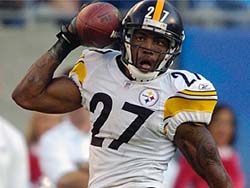 It's only OTA's, but with Green Bay Packer starting safeties Atari Bigby and Nick Collins not participating in the spring voluntary OTA workouts, free agent signee Anthony Smith is getting a good chance to show coaches what he can do.

Smith signed a two-year, $1.485 million deal in March after playing in a 3-4 defensive scheme with Pittsburgh.  He started 14 games over the last two seasons there, but inconsistency and immaturity kept landing him in the coaches doghouse.

Smith has been getting first team reps alongside Aaron Rouse during OTA workouts while Bigby recuperates from off season ankle surgery and Nick Collins stays away over his contract.  Coach Mike McCarthy said he's happy with Smith's performance to date and he figures to be a part of the Packers safety rotation during the coming season.