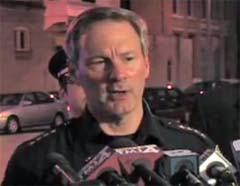 Milwaukee's police chief says a teen who shot two officers may have committed nearby muggings in what's been a safe neighborhood.

Chief Ed Flynn gave more details on why the officers stopped the 18-year-old on his bicycle in the Walker's Point neighborhood Tuesday. Flynn said shooting suspect Julius C. Burton was acting suspiciously – and the two officers were patting him down when he pulled out a gun and began shooting.

The officers – 26-year-old Graham Kunisch and 21-year-old officer Bryan Norberg – never had the chance to draw their weapons. Kunisch is in critical condition at Froedtert Hospital. Norberg was hospitalized in satisfactory condition. Flynn expects both to survive.

Flynn praised neighbors for aiding in Burton's apprehension an hour after the shootings. He was found hiding in a nearby home he allegedly broke into.