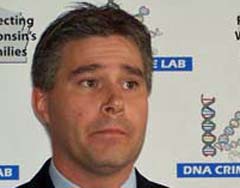 Wisconsin's attorney general has gone on the offensive to fight budget cuts, and his decision to allow Department of Justice employees to lobby state lawmakers on behalf of their agency has resulted in an open records request by the state Democratic party.

In a conference call with reporters, Attorney General J.B. Van Hollen says cutting five percent from the state Department of Justice budget will mean the equivalent of 125 vacancies will have to created in DOJ, or about twenty percent of the agency's workforce. "That means in addition to the vacancies that I have been managing, to make sure we save money all along, we would probabley have to lay off approximately eighty more people, as well as come up considerable other fiscal savings," says Van Hollen.

Van Hollen says those cuts will impact a wide range of DOJ responsibilities, including environmental enforcement, consumer protection, crime lab and division of criminal investigation personnel, fewer resources for drug and arson investigations, "some cuts from just about everywhere." Van Hollen says in past budgets, DOJ has been exempt from cuts – but not this time. And, he thinks he knows why. "When every law enforecment agency is exempted from these cuts, except the only Republican-controlled agency, when we had been exempted from similar types of cuts in the past, (it) has no explanation other than partisanship, then I've been able to determine," says Van Hollen, who says he's attempted to be non-partisan in his management of DOJ. "Despite those efforts, (Joint Finance Committee co-chairs) Representative Pocan and Senator Miller have made no bones about the fact that they wanted to play partisan politics with my office, over a number of different issues."

Van Hollen says DOJ employees are actively lobbying state lawmakers, to exempt the agency from further budget cuts. Van Hollen has also spoken to Assembly Speaker Mike Sheridan who, he says, is sympathetic to his concerns. The lobbying by DOJ employees drew a swift reaction from the state Democratic Party of Wisconsin, which sent a letter to Van Hollen  (PDF) requesting to see records relating to that effort. "According to sources within your agency, at least four of your top deputies, Ray Taffora, Kevin St. John, Gary Hamblin and Chris Blythe, have been contacting managers and instructing them to pass down these political lobbying orders and talking points to rank-and-file staff at the DOJ," DPW Executive Director Jason A. Stephany wrote in the letter, which requests all correspondence between those DOJ employees and members or staff of the state legislature.

During the conference call, Van Hollen also addressed cuts in state spending he might recommend, in order to retain staffing levels within DOJ. "The reality is when we're looking at cutting support to victims and to children and infants and toddlers who are being raped, who we could protect if we just had the resources," says Van Hollen. "I think spending five million dollars is a horrible lack of priorities. Five hundred thousand dollars on an opera house, one thousand dollars on a stone barn. Six-point-six million dollars on a Dane County watershed. Everybody agrees that these things are wonderful, but we won't have an environmental enforcement agency to protect that watershed.