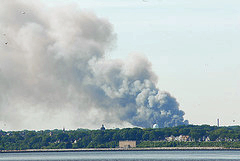 Milwaukee officials say they've identified two suspects in connection with the Patrick Cudahy meat plant fire on July 5th, which caused over $50-million in damage. It took over 150 firefighters three days to extinguish the fire. Cudahy police chief Thomas Poellot says survelance video was examined and found that a military flare that landed on the roof caused the blaze.

Officials wouldn't say how the suspects managed to have military flares in their posession.