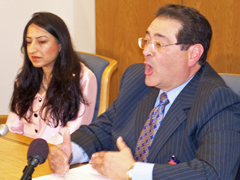 On June 11th, a UW Hospital in Madison patient had brain surgery and was later discovered to have Creutzfeldt-Jacob Disease. Since then 53 patients who received operations have been contacted about possible contamination through the surgical gear. Dr. Carl Getto, Sr. VP of Medical Affairs, says there is an “infinitesimally low” chance the patients will contract the fatal brain disease.

UW officials said the patient had a CJD type that is not associated with Mad Cow or Chronic Wasting Disease.

The hospital will cover the cost of follow up with physicians or even counseling if needed. Because there is no single test for CJD, the UW official says diagnosing the rare disorder involves careful analysis of symptoms on patients. Getto adds symptoms can often be explained by other conditions.

The hospital follows standard surgical tool sterilization but in cases of CJD occurring there is an “enhanced” sterilization procedure that all surgical equipment is now undergoing. He says 1976 no one has contracted CJD despite three similar occurrences at other hospitals.

The National Institute of Neurological Disorders and Stroke says CJD affects about one person per million annually.