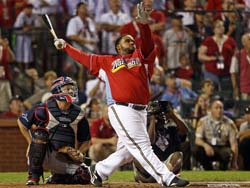 Fielder's first derby experience came in 2007, but his 3 home runs that year saw him exit the first round quickley.  Last night was different.  Fielder and Cruz both clubbed 11 round one homers, getting a good jump on the rest of the field.

Fielder also won the competition while using teammate Ryan Braun's bat, instead of his own.  He clubbed a 503 foot home run with that bat and wowed the St. Louis crowd.

Fielder will join teammates Ryan Braun and Trevor Hoffman in tonight's all-star classic.  The National League is looking to end a streak of 12 straight winless games.  The NL is 0-11-1 in the last 12 contests.