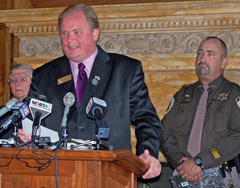 A new measure addressing "Thrill Kills" gets momentum at the capitol.

"People who torture and slaughter animals are sick individuals."

Fort Atkinson Democrat Andy Jorgensen's legislation is in response to the recent death-by-snowmobile involving several deer and dozens of ducks. Jorgensen's bill is aimed at operators of any off-road vehicle who recklessly harm or kill wild animals in Wisconsin.

"This bill is simple and right to the point. It seeks to solve a complex problem. No person may harm a wild animal by harassing or pursuing it with a motor boat or motor vehicle, period."

Jorgensen says state law needs to change, in order to keep such crimes from going unreported and unpunished. If it's an accident, he says, it must be reported. And, if it's intentional, the animal abuser must be punished.

"It is disingenuous for someone to say it was an accident when they did not report the incident to law enforcement or to the DNR. A simple reporting requirement may help differentiate between an honest accident and an intentional crime."

Considering the varying degrees of severity for this crime, from simply annoying the animal to torturing or killing it, Jorgensen's bill leaves the punishment up to a judge's discretion. That could involve a fine up to $10-thousand, three years of probation, revocation of vehicle operating privileges, a mental health assessment, or a Class I felony charge.

Note: Jorgensen has the support of several District Attorneys throughout the state, law enforcement, the state DNR, off-road vehicle clubs, and conservation clubs.