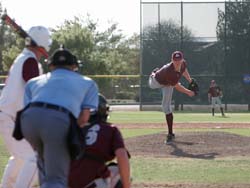 September 1st is the deadline and the UW-La Crosse baseball team is still more than $18,000 shy of the $50,000 it needs to raise to keep the program afloat for another year.

The baseball and tennis programs at the school were eliminated in light of the state's budget deficit.  But both programs were given the Sept. 1 deadline to try to raise enough money to privately fund themselves for the upcoming academic year.  That's $50,000 for baseball and $40,000 for tennis.

The fundraising efforts are being led by coaches and players, both past and present.  As of today (Tuesday), the Eagles baseball team has raised $31,047.  When they reach $50,000, then the fund raising efforts immediately move to the $200,000 effort, which is needed to keep the program going for several years.

There's La Crosse baseball alumni all over the state and many of them are spearheading the effort.  Appleton East baseball coach Dan Heinritz played for longtime coach Bill Terry at La Crosse.  Heinritz said playing baseball and attending school in La Crosse has had a significant impact on both his career and his life and would like to see others have that same chance.

Heinritz said losing baseball at La Crosse would have a negative impact on the entire conference ( WIAC ).  He said other schools would likely follow and Whitewater , Stevens Point and Oshkosh would likely be the only survivors.

The fundraising effort could use a big shot in the arm from a major donor.  Baseball in the long term at the school may depend on it.

For baseball fans looking for more information, or for a way to make a financial contribution, they should go to www.saveuwlbaseball.com .

Listen / Download – Bill Scott on efforts to save baseball at UWL 3:52