You are here: Home / Brewers / Villanueva to start for Brewers tonight 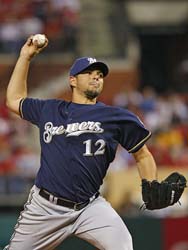 Milwaukee Brewers manager Ken Macha announced Monday that reliever Carlos Villanueva would get the start tonight when the Brewers face the Washington Nationals in game 2 of their series at Miller Park.

Macha said Villanueva's starting experience, the fact that in five games against Washington, Villanueva has held the Nationals to a .133 batting average with a 2-0 record and has allowed two runs against them in 12 1/3 innings is the reason for the choice.  Macha also said he is more comfortable with Villanueva's pitch variety than he is with Tim Dillard, who was also under consideration.

Dillard hasn't started in the Majors, but he is 10-4 this season in the Pacific Coast League with a 3.66 ERA at AAA Nashville.

Villanueva will be on a pitch count tonight, most likely somewhere in the 60 pitch range.  That means Macha will have to dip into a bullpen that is already beaten up.

The Brewers are desparate for a good performance from their pitching staff and have their fingers crossed that they'll get a solid effort tonight.