You are here: Home / Health / Medicine / Drugs and driving 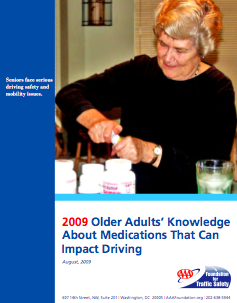 A new study shows many older drivers don’t realize the impact medications may have on their abilities behind the wheel.

The report from the A (Download Report/PDF) found nearly 78-percent of respondents over the age of 55 are on at least one form of medication, and roughly two-thirds of them don’t know if those drugs could impact their ability to drive. Pam Moen of AAA Wisconsin says that can result in dangerous situations, due to the impairing effects some of those drugs could have.

Moen says the results show people need to find out more about the drugs they’re taking. She says people need to talk with their medical provider about any prescriptions, along with any potential interactions that could make them unsafe to drive.

Moen says doctors also need to do a better job of informing patients about drugs that may increase their risk of causing a traffic crash.