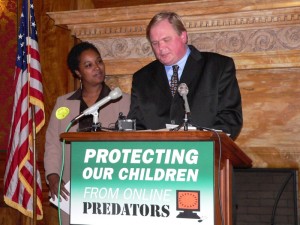 A couple of lawmakers promote their E-Sex Offender Database bill.

The new measure requires sex offenders to register their emails, websites, and any social networking profiles. Assembly Democrat Andy Jorgensen of Fort Atkinson wanted to cast a wide net, because technology moves at lightning speed. In fact, he says, when he started drafting this legislation, Twitter didn’t even exist.

“This bill is broadly designed to tackle any new technology that may arise in the future. As they investigate crimes against children, this legislation gives Department of Correction, the local law enforcement, one more tool in their arsenal to protect our children from these devious individuals.”

Under current law, a person must register with the Department of Corrections as a sex offender if he or she has been convicted of certain sex offenses. Officials may require fingerprints; a recent photograph; and home, work, and school addresses.

Senate Democrat Lena Taylor of Milwaukee acknowledges that people have many aliases, but not reporting them would be a violation.

“We have laid a foundation and an expectation that says ‘this is the standard and if you violate it you will now be able to have consequences because  it’s a tool the agents can use’. What I know for sure is that if we don’t do it we don’t move forward in any way.”

The sex offenders must keep all their information up-to-date. According to Taylor, My space recently found more than 29,000 sex offenders have profiles on their site.