You are here: Home / Health / Medicine / Animated polyp encourages you to get a colonoscopy 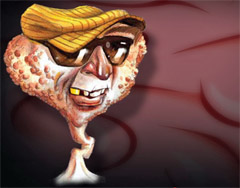 He may be the most disgusting animated character since ‘Ren and Stimpy.’ A Wisconsin health care provider is trying a novel approach, to encourage a lifesaving procedure.

Sharon Hanks with Appleton-based Theda Care says a new website featuring ‘Pauly Polyp’ uses a bit of humor to convince people over 50 to get a colonoscopy. “He’s got a little bit of an attitude,” Hanks says of the sunglasses and newsboy cap wearing animated polyp. “He was created to help us communicate the importance of colon cancer prevention and early detection.”

Pauly suggests you may even want to pass the word along. “Click on that website and send a card to a friend who is that age of 50 or older, and hasn’t had a colonoscopy,” says Hanks. She says Theda Care wanted to try something different, because doctors and nurses were having a tough time convincing some patients to get colonoscopies.

“Colorectal cancer is the second leading cancer killer in the United States, but it doesn’t have to be,” Hanks notes. “If everyone over 50 has a regular screening colonoscopy, as many as sixty percent of the deaths from colorectal cancer can be prevented.”