Matt Holliday broke a 4-4 tie in the 7th with a three-run homer, sending the St. Louis Cardinals to a 7-6 win over the Milwaukee Brewers on their series opener in St. Louis.  Holliday’s blast made a winner of pitcher Joel Pineiro, who won his 8th straight and 14th game overall.

The loss goes to David Weathers, but it was Todd Coffey who served up Holliday’s blast.  Braden 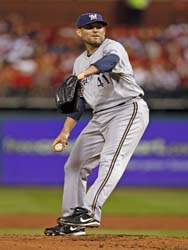 Looper (pictured) got the start for the Brewers and went 6-innings against his former team.  Looper allowed 4 runs on 8 hits.  Albert Pujols added his Major League leading 41st home run of the season off of Looper.  It’s the 33rd homer allowed by Looper this season, which leads the majors.

The Cardinals improved to 26-9 since the July 24th trade that brought Holliday to St. Louis from Oakland.  They’re 30-4 since July 1 in games started by the Cardinals big three, Adam Wainwright, Chris Carpenter and Pineiro.  Carpenter will start game two of the series for St. Louis tonight, against Milwaukee’s Dave Bush.

Casey McGehee hit a three-run homer for the Brewers, who saw their
3-game winning streak come to an end.