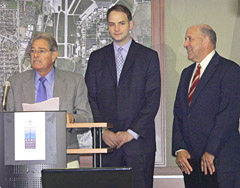 Representatives from Midwestern states meet Wednesday in Washington to push for a high-speed rail network.

Wisconsin is one of eight states joining forces to get federal funding to develop the Midwest corridor. Several officials met with U.S. Transportation Secretary Ray LaHood to make their case.

Wisconsin Transportation Secretary Frank Busalacchi says the intention of the meeting is to show unity among the states.

“You know we have a coordinated approach. Unlike probably the rest of the country, I believe the Midwest has got its act together.” And he says, “I think it’s important that the people in Washington see that.”

A representative of Busalacchi’s office made the trip to D.C. Busalacchi participated in the conference call.

So, when will the feds decide who gets the stimulus money from the American Recovery and Reinvestment Act?

Busalacchi says, “I do not know when they’re talking about making the announcements on the grants. I really don’t.”

Kristi Lafleur with the Illinois governor’s office adds that there is nothing more than speculation right now about who will benefit from federal stimulus money, and there’s no way to know when the decision will be made. She says the main reason for the meetings was to show unity and to make Secretary LaHood aware that the Midwest states have responded to his advice by creating a steering committee, and have meetings and communicating regularly.