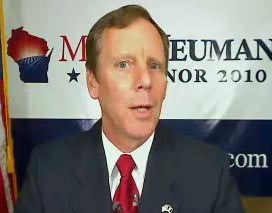 Republican Mark Neumann has officially announced his campaign for governor. More than a month after announcing his candidacy after filing papers with the Elections Division of the Wisconsin Government Accountability Board, Neumann conducted an on-line press conference with media from across the state.

The business owner and former Republican congressman says his principal goal as governor will be to attract and retain jobs for Wisconsin. “In order to attract jobs to the state of Wisconsin, we’re going to have to dramatically reduce taxes in the state, and we do that by controlling spending,” says Neumann, who also says he’d cap state government spending at one percent below the rate of inflation. “That would effectively cap how much money is being spent at the state level, and that would create surpluses that we could then use to return to the people in the form of tax cuts. When taxes go down, it’s more likely that businesses and jobs are going to locate here, and that’s what it’s all about.”

Neumann says he’ll also focus on improving K-through-12 public education in Wisconsin, and protecting the environment without harming the state’s business climate. “We need to have the best educated kids in the entire world, and we need to figure out how to reach our environmental goals and objectives, but do it in a way that creates jobs in the state of Wisconsin, instead of causing them to leave our state and our country.”

Neumann’s principal opponent for the Republican nomination is Milwaukee County Executive Scott Walker, someone Neumann notes has been a politician his entire adult life. “On the other hand, we offer the alternative of having successful political time in office . . . when I was in Congress,” says Neumann. “But also, the private sector job creating experience that we bring with us is something that I think the people of this state are going to look for.”