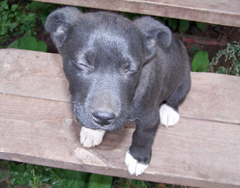 Dozens of people turned out to testify at the Capitol Wednesday, in support of legislation to regulate dog breeders in Wisconsin. State Representative Jeff Smith is an Eau Claire Democrat and the author of the Assembly version of the bill. Smith says criminal charges have been largely ineffective in combating irresponsible breeders.

“State statute provides penalties for violations of animal cruelty,” Smith said. “But the threshold is so high that even the worst offenders often come away with little more than a slap on the hand, and they keep their dogs and continue breeding.”

What about federal regulation? Dr. Yvonne Belay, humane veterinarian with the state Department of Agriculture, said the USDA regulates only a relative handful of breeders which provide puppies for pet stores. Dr. Belay said people who complain about “puppy mills” are “incredulous” that the state doesn’t already regulate and inspect dog breeders.

Dozens of people testified Wednesday at a public hearing before Assembly and Senate committees. Under the bill, anyone selling more than 25 dogs in a year will need to be licensed through the state. An amendment provides an exemption, allowing an individual to sell more than 25 dogs in a year, so long as they come from 3 litters or less. At least 27 states have some regulation of dog breeders.