You are here: Home / Sports / Rouse goes from starter to unemployed 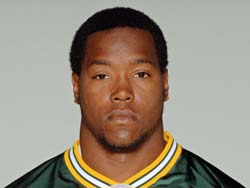 Rouse (pictured), a third-round selection in the 2007 NFL Draft, appeared in 27 career games with the Packers.  An injury to Atari Bigby in week one gave Rouse a start last week against Cincinnati.  But Rouse had to leave the game after receiving a neck stinger.

Giordano is a 5th year pro.  He spent the past four seasons with Indianapolis, playing in 55 games and starting six.  The fourth-round selection from California in 2005, will wear No. 47 with the Packers.

Randolph spent training camp with the Packers as a non-drafted free agent from Maryland.  He replaces Jamon Meredith, who was signed off the Packers practice squad by the Buffalo Bills.